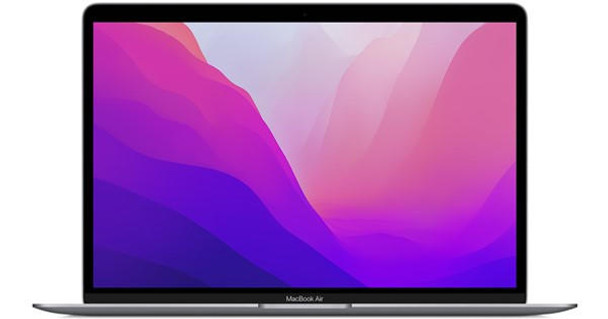 Apple's thinnest, lightest notebook, completely transformed by the Apple M1 chip. CPU speeds up to 3.5x faster. GPU speeds up to 5x faster. Apple's most advanced Neural Engine for up to 9x faster machine learning. The longest battery life ever in a MacBookAir. And a silent, fanless design. This much power has never been this ready togo.

Apple M1 Apple's first chip designed specifically for Mac, it delivers incredible performance, custom technologies and revolutionary power efficiency. It was designed from the very start to work with the most advanced desktop operating system in the world, macOS BigSur. With a giant leap in performance per watt, every Mac with M1 is transformed into a completely different class of product. This isn't an upgrade.

8-core CPU M1 has the fastest CPU we've ever made. With that kind of processing speed, MacBookAir can take on new extraordinarily intensive tasks like professional-quality editing and action-packed gaming. But the 8-core CPU on M1 isn't just up to 3.5x faster than the previous generation, it balances high-performance cores with efficiency cores that can still speed through everyday jobs while using just a tenth of the power.

All-day Battery Life Up to 18 hours of battery life. That's 6 more hours, free of charge. Machine Learning Up to 9x faster.Even for a 16-core Neural Engine, that's a lot to process. Apps on MacBookAir can use machine learning (ML) to automatically retouch photos like a pro, make smart tools such as magic wands and audio filters more accurate at auto-detection, and so much more. That's not just brain power, that's the power of a full stack of ML technologies.

Unified Memory - The do-it-all notebook gets do-the-unbelievable memory. The M1chip brings up to 16GB of superfast unified memory. This single pool of high bandwidth, low latency memory allows apps to share data between the CPU, GPU and Neural Engine efficiently, so everything you do is fast andfluid.

Technical specifications - Go to apple.com/ie/macbook-air/specs for a complete set.